See how we've been celebrating 100 years of UFU!

A message from the UFU president, Victor Chestnutt

We did not get the outcome we wanted from our MLAs during the Consideration Stage on the Climate Change at Stormont. We may have lost that battle, but the war is still to go. What happened at Stormont on 1 February was a setback, but we are not down and out. I urge members to continue contacting their local MLAs and councillors, highlighting their concerns that a majority of MLAs ignored farmers, the food industry and all logic to vote in favour of amending the Executive’s Climate Change Bill to a net zero target by 2050, which is unscientific and unachievable.

The UFU will continue to oppose this decision and set out our case that it is wrong for farmers, for our biggest industry and for the local economy. The UFU is not opposed to Climate Change legislation, but targets need to be fair and credible. We will engage with all MLAs to find a solution that works for our farmers and will ensure a future for our farming families and rural communities. This must be based around continuing to produce food to the highest animal health and welfare standards, feeding people in a sustainable way.

I would like to thank all our members who travelled to Stormont, taking the time away from their businesses to help us lobby. The decision by MLAs was wrong, but they and others know where we stand and cannot ignore our rally or the message it delivered about fighting for the future of our industry. We were encouraged by the support we received from farmers and the wider agri-food sector. We have not ruled out further rallies and demonstrations to ensure we get climate change legislation that heeds and follows expert advice. We may need that immense support we saw at Stormont from our members again.

What can members do now?

The UFU is urging members to continue contacting their local MLAs and councillors, particularly those who voted to support these targets that are not based on expert advice and have no scientific analysis behind them. The impact on farmers and rural communities must not be ignored. It is vital that members local representatives are aware that farmers and rural people will not be dictated to by political ideologies or urban dwellers who fail to understand the importance of the agri food industry to the local economy and society. While the net zero target by 2050 cannot be changed we must find a way to prevent the decimation of our industry whilst tackling climate change.

Councillor details can be found here.

What is in the Climate Change No. 2 Bill?

The Executive’s Climate Change No. 2 Bill was based on advice from DAERA officials, legal teams, and experts from the UK Climate Change Committee (CCC). The CCC in its UK wide recommendations to enable the UK to reach a net zero target by 2050 had concluded that given the importance of the agri-food sector to NI and the fact that methane from cattle and sheep is ‘hard to treat’ it was not appropriate for NI to set a net zero target.

They clearly indicated that if this happened there would be ‘carbon leakage’ as meat and dairy products would be imported from overseas where emissions are higher and standards lower.

The UK experts on the CCC have also advised that a target of Net Zero for all Greenhouse Gases by 2050 is not possible and cannot credibly be set for NI. Going beyond their advice would result in:

Taking all this in account the CCC recommended that a balanced pathway for NI was to reduce greenhouse gas emissions by 82% by 2050 and this target was proposed by the Minister, agreed by the NI Executive and taken to the Assembly for approval. This was seen as NI’s fair and equitable share of the UK net zero target by 2050. This however was rejected by MLAs during the ‘Consideration Stage’ last week at Stormont when Sinn Fein, SDLP, Alliance, Greens, People before Profit decided to vote against all the expert advice in favour of a net zero by 2050 target.

What have the UFU been doing?

Throughout this process, the UFU have supported the need to reduce emissions but in doing so it must be based on sound scientific evidence and also avoids creating carbon leakage by exporting our food production overseas where emissions are higher, and standards are lower. In addition, farming is very much part of the solution in that we are best placed to sequester carbon.

Over the past year, the UFU have been lobbying at all levels. There have been countless meetings with politicians, political parties, officials, giving evidence at the NI Assembly AERA Committee and constant lobbying. We have built alliances with the wider agri-food and business sectors. The UFU have encouraged members to meet with MLAs on farm at organised constituency meetings and to write/email MLAs. The efforts culminated with the rally at Stormont on Tuesday 1 February. This has been a huge effort but disappointingly despite all the evidence, some MLAs have instead played party politics with the livelihoods of farmers, related businesses and the wider rural economy and society.

Following this stage, the Bill moves to ‘Final Stage’ for the final vote in the Assembly – this is the last chance for the bill not to proceed. No amendments are debated at this stage. Members debate and vote on whether to pass the Bill. After Final Stage, further checks must be carried out before the Bill can receive Royal Assent and become law.

What does all this mean for farmers?

DAERA are likely to have to revise their proposals currently out for consultation on what future agriculture support looks like and how it aligns to a climate change target. Policies would have to be set to deliver the much more challenging emissions targets over time which ultimately could change farming practices.  It is unlikely that every farm would have to make the estimated reductions to hit the overall target but instead at an NI level. However, people still need to eat and the demand for food will continue to grow. As science develops there will be solutions to tackle methane from agriculture. Great progress is already being made and this may deal with emissions reductions without drastic cuts in numbers, but we need time within the legislative framework for this work to be implemented on farms.

Regardless of the target set, change is being demanded of agriculture, but the UFU will continue to fight that any change must be based on expert advice and sensible. We also need to ensure that all new research is considered in policy decisions particularly around methane. 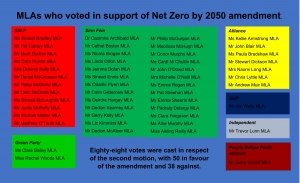 MLAs who voted in support of Net Zero by 2050 amendment.