See how we've been celebrating 100 years of UFU!

Data recently released from Animal Health and Welfare NI (AHWNI), indicates that Northern Ireland is continuing to make steady progress towards its goal of eradicating BVD (Bovine viral diarrhea) from our industry. The data indicates that the 12-month rolling percentage of calves testing positive has fallen to its lowest level since the beginning of the scheme (see chart). 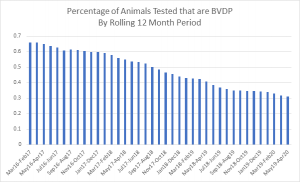 Additionally, the number of BVD positive animals retained on farm for more than 35 days and the number of herds containing these animals, has also reached a new historic low of 277 animals in 193 herds. The continued reduction in the number of retained BVDP animals during recent months is particularly encouraging as it coincides with the spring calving period.

As of 01/06/2020, there was a total of 449 BVDP animals alive in 295 herds throughout Northern Ireland, which is a slight increase from April when these figures were as low as 381 animals in 277 herds. Whilst disappointing, this seasonal increase is expected during the spring calving period. As such, we would encourage producers to remove these animals as quickly as possible to reduce the risk of viral spread to their own or neighbouring herds. Additionally, with Farm Quality Assurance Scheme (FQAS) inspections recommencing this week, we would warn producers that the retention of a BVDP animal for more than 35 days will now result in a non-conformance being raised within FQAS.

One area of continued frustration for the scheme is the number of animals that remain untested within Northern Ireland. To address this issue, the UFU have written to NIMEA this week seeking support for the introduction of a non-conformance to the FQAS scheme for having an animal over one year old with a BVDU status in the herd.

Additionally, the UFU's animal health and welfare committee will be meeting later this month to discuss the introduction of fixed penalty notices within the amended BVD legislation thereby making it more straightforward to address breaches of the legislation which are undermining the efforts and progress being made by the vast majority of the industry.

As can be seen from the above, tremendous progress has been made by the industry towards eradicating BVD in recent years and the direction of travel has been well established. Controls and penalties around BVD are only going to increase as we continue to drive towards eradication and the number of people stalling progress continues to diminish. As such, we would encourage producers to take responsible and prudent actions now and ensure their animals are promptly tested for BVD and positive animals are removed without delay.

In recent months, the Ulster Farmers’ Union (UFU) has continued with efforts to speed up the eradication of bovine viral diarrhoea (BVD) from Northern Ireland (NI). Broadly speaking, steps taken by the industry to date have been very successful, with the total number of BVD positive animals alive falling by 67 percent from 1,244 in April 2018 to 406 in March 2020. Additionally, the number of herds containing a BVD positive animal has also fallen by 66 percent from 785 to 264 during the same period (see chart). Encouragingly, this month’s data also shows that the number of BVD positive animals retained on-farm for more than five weeks has fallen below 300 for the first time in the programme’s history (currently 286) and the number of herds retaining these animals has also fallen below 200 for the first time (currently 196).

Whilst BVD prevalence is continuing to fall, the retention of BVD positive animals by a small minority of farmers continues to stifle efforts to eradicate this disease. As BVD is highly infectious, each retained animal poses a significant risk to other cattle on the holding as well as neighbouring farms. Given this, we would encourage owners of BVD infected animals to act responsibly by complying with current legal requirements to isolate BVD positive and inconclusive cattle indoors until they can be retested or slaughtered. Additionally, we would also remind producers that the retention of a BVD positive animal on-farm will now raise a non-conformance within the NI beef and lamb Farm Quality Assurance Scheme (FQAS).

Going forward, an additional area of concern for the UFU is the fact that around 12,000 animals are currently untested for BVD. In order to address this issue, the UFU is currently in discussions with other industry stakeholders exploring options to reduce this number. Eventual policy may include the introduction of a FQAS non-conformance for the presence of a BVDU animal over a certain age on a farm and the skipping of BVDU animals at slaughterhouses unless a BVD status is promptly obtained. Given this direction of travel, the UFU would urge herd keepers to check their herd lists before cattle are put back out for summer grazing and ensure that any animals that currently hold a BVDU status are tested promptly to avoid inconvenience at a later date. 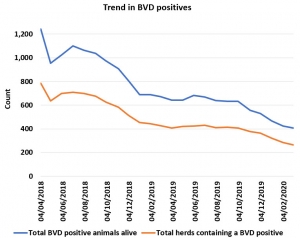